When I asked Geoff Hodgson to help me in my quest to capture the three North East counties, he declared  – “ we could do that in a day!” Geographically, he is probably right, but in reality….!?

In searching for somewhere interesting to try to net Co Durham, and through Fly Fishing Forum, I had an exchange with Daran S, who advised that –

“…the Tees is a magnificent river. At the source it is wonderful wild brown trout fishing. Rugged,  boulder-strewn river in remote, isolated countryside. You can fish for £12 and not see another person all day. An 8oz fish is a scrapper and they will rise to dry flies all day long. Not easy fishing, but get it right and 30+ fish a day is not unheard of. Up there, the river is in County Durham.”

In a later email he offered this additional guidance –

“If it’s the upper reaches of the Tees you after, go to the gift shop next to the High Force Hotel. You can buy day tickets for (I think) £12. Ask for a map and the code for the gate to Widdybank Farm.

Drive up the valley and turn left just at the Langden Beck hotel and follow the road. You’ll see the gate down to the farm on your left (there are signs showing Teesdale Wildlife by the gate). Follow the track down to the farm and park. You then have miles of the most unspoilt wild brown trout fishing in the country. Fish anywhere. There are plenty of fish behind and in front of every rock. I usually fish dries as they will rise to almost anything. Something bushy and black is a good place to start. You’ll miss loads of takes as they are lightning fast. If you think you’re missing too many, change down a size. If they aren’t taking dries, try a small beaded nymph, fished Duo style. I like an orange bead for the peaty, stained water.

One warning. The weather can change very quickly so be prepared. A gentle breeze further down the valley can mean a bit of a gale in the upper reaches. I usually use a fairly short rod and fish very close. You can actually fish from the bank if you don’t want to wade. The river is full of ankle-breaking rocks and in places can be a bit hard to wade in.

Just keep moving. One or two casts into each run and then move on. A good day will see you take 30+ fish………”

I was intrigued, and was bound to follow his advice and head to the upper reaches of his stream.

The A1 is endless, but more interesting than the M1. The A66 is much more interesting than both, as it heads towards the Pennines, but get onto the B 6277 as it leaves Barnard Castle, and you get into serious ‘shock and awe’ territory, where the views of the North Pennines are simply glorious, and stretch out, horizon to horizon.

This year, after a warm March and wet April, when everything went onto hold, plant life eventually came to terms with the volatile weather, and the result which I saw was a green and luxurious vista which was welcoming and almost soft and gentle, but I bet at times it looks raw and unforgiving, and especially when the sleet is driving laterally across the windscreen, and it is cold, and “did I remember to put a shovel in the boot?”

The drive through Middleton-in-Teesdale is punctuated by the sight of many white washed buildings which I later learn are all owned by the Lord Barnard, whose family has lived in Raby Castle since 1626, and is still considered to be one of the finest medieval castles in the country. The drive to my overnight destination at the High Force Hotel, at Forest-in- Middleton

takes me to an elevation of some 1000 feet above sea level, and the welcome from Mike and Vicki is genuine. Actually, this early in the season, I am their own guests, so they really are pleased to see me!

I cannot wait for the next morning, and to try to ’net’ County Durham, and so waking early, I jumped into Tonka, and used Daran’s instructions to find where he feels I should fish. The rains then are what I would call ‘mizzle’ but hardening to serious rain, but it is a long way off the beaten track, and I am here, so will bear whatever Nature has in mind for the day, and in fairness, the forecasters have been advising that what I see is quite what I should expect. The Tees is fed by the Cow Green Reservoir, and I figure that means, that so high up its length, the flow is constant and under influenced by the run off that downstream stretches will be coloured by.

The north bank waters are part of the Upper Teesdale Estate, and I had to drive back to Middleton to buy a day ticket from the Raby Estate office, and then retraced my steps to whence I had been a couple of hours earlier, and off road, drove the mile to Widdy Bank Farm. It was raining, seriously, now!

The river, high in the Pennines, had an Iceland look to it, 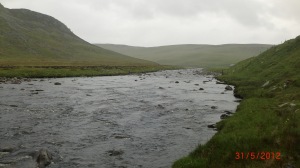 and made me feel I was on a practice run for our next trip in early August! It is bleak up here, and the wind was blowing in showers of penetrating wetness, and I was pleased that just recently I had purchased a new Patagonia wading jacket. The river here is boulder strewn and the peaty water made it difficult to determine the depth, so I fished from the bank. That gave me problems because I had taken my Loomis, and punching a 4 weight line through the breeze was challenging, but after working the calmer water in between runs I hooked up, and soon landed a beautiful little wild brown, 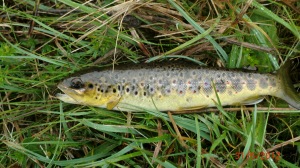 and thereafter did not feel quite so wet and damp! I guess I must have walked a couple of miles searching through the runs and riffles, and no matter that no more fish came to net, I had captured County Durham, and decided to try downstream in lass bleak conditions.

And so, just a mile or three later I was near Bowlees. The river here, downstream of the famous High Force waterfalls is dramatic in its runs over monstrous rock formations, 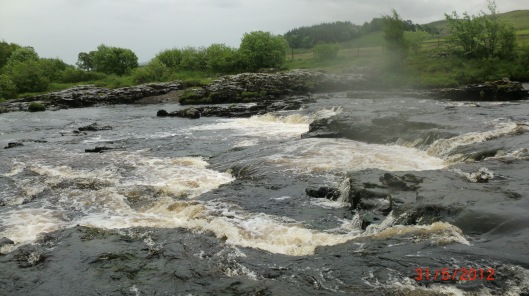 and into deep pools, along pebbly glides, and between tiny wild flower covered islands. So beautiful…but such difficult wading. I have rarely encountered such slippery stones, even more than the Usk’swhen the algae is in full growth, and that’s saying something. Fishing now with a five weightline and longer rod (Greys 8’ 3”), I was able to cast a fair way and cover a lot of water, and along came my second CD fish, of deep butter flanks, and this one nearly one lb. 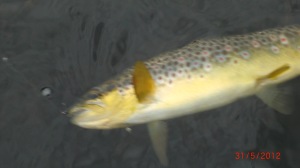 I had hoped that I would be fishing dry, but in the wet and windy conditions, I never saw a rise so Skues won, and a PTN was the taking fly.

And then I got to wonder about Geoff’s assertion, and thought, “well if I head off to Rowlands Gill, now (it was one-ish) then potentially I have two bites of the cherry, if there is nothing rising, tonight!”….so did!

I loved the setting of this wild part of our country…a ramblers’ paradise, but be prepared. I can see how conditions could turn nasty, and the hills are remote and isolated. The towns and villages are attractive, and the people are most welcoming, for they know that only the committed make the long trek to be there, and they need visitors. A poor summer makes it a long winter for those dependent on this trade.