The Duke of Northumberland owns Albury, through which picturesque village, and in the shadow of the North Downs, runs the diminutive River Tillingbourne, en route to the River Wey, which it joins near Guildford. Toward the western edge of the village is a fishery called Vale End.

Here, the stream offers flow to refresh two man-made lakes which are stocked with rainbow trout for still water preferees.

The shallow stream passes gracefully by the lakes, under the protection of Belmont Wood, and its deciduous heights. It is sandy and gravelly. 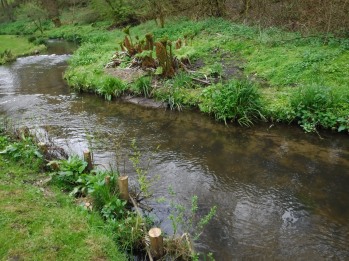 The Tillingbourne has a natural stock of small wild brown trout, so there can be no reason to stock the stream, because the more aggressive US ‘arc de ciel’ will likely eliminate the tiny indigenous locals. But escapees, there must be, and so I found there to be.

I have fished it before here, and didn’t (!), and said I would return, and did today on a grey late April morning with the temperature fighting hard to hit double digits, and wrapped up accordingly. There was no fly life or hatch this day, so any residents would be ‘eyes down’ and I set up a duo rig on light tackle for a hoped for, couple of hours entertainment.

When a greedy rainbow realises it is hooked in a seven feet width of stream, it has choices. It can go up and up, or down and further down, or up and down. It can seek refuge in the multitude of tree roots at its disposal, and whichever, on light tackle, the rod holder needs patience. Writers talk about the angler ‘bullying’ the fish into submission, as opposed to the fish bullying the angler. I get that with sailfish in the Indian Ocean, but in a Surrey stream, and a 3-weight…come on!

But I did, and twice.

The first, a solid muscled beaut of about 3lbs,

and the other, a rather pallid and sky blue version of maybe 1 1/2lbs.

Surrey does not have many rivers, and has few trout streams!

You may know of the Mole (a notable coarse fishing river), the Wey (ditto, but stocked with browns in parts, and including by Peper Harrow FFC), but you may not have heard of the Cranleigh Water, nor also –

This glorious little tributary of the Wey, rises near Coldharbour and flows gently through copse after wood after copse. It picks up water from another, tinier stream which rises in the delightfully named, Friday Street, and passes through idyllic villages with evocative names like Abinger Hammer,and Gomshall. Here it irrigates meadows of water cress, before gliding by the cricket ground where families picnic, and children paddle in its alluring shallows alongside the flocks of resident duck and migratory geese. Then onto Shere, where it is hidden, protected behind the fences of impressive country seats of its wealthy residents, before revealing itself once more as it meanders into the manicured delight, which is the village of Albury. (home for Peter Cockwill’s bountiful fishing shop!)

Albury is the Surrey estate of the Duke of Northumberland. His estate team ‘manages’ the Tillingbourne, and via diversions or by damming they have created three trout lakes for still water preferrers which are stocked with rainbows. Earlier stocking of parts of the river have produced a head of resident browns, and these and some stocked rainbows are in the river at Albury.

I fished the beat running from Vale End lake,

and here the river is very narrow, and rarely more than ten feet wide, and less when Summer grasses impede. 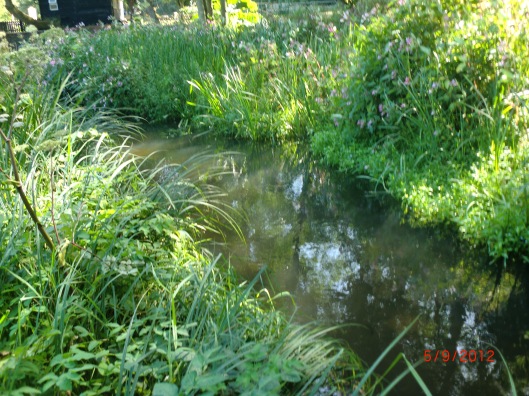 Tree lined, but with banks mowed in places to aid access, the many alders demand complete concentration when casting. The stream is  shallow and flows over sand, and weed growth is sparse. The bends produce fish holding pockets, as do the holes below tactically positioned rocks and logs.

And in one of these I encountered my first fish, which sipped in my weighted PTN. When realising he was hooked he took off, and with only one escape route open, he rushed headlong past me downstream, and my light tackle could not hold him, and my leader snapped at the tippet knot. I forgot just how powerful and aggressive rainbows are when compared with their spotted friends, and my 4 weight outfit was inadequate. Another took a PTN from a hole below an alder, but he was lost, too.

The fishing offers the day ticket purchaser the opportunity to return if the number of fish one applies to take, are not. It is a very pretty fishery, and only 30 minutes from my home, so I will return!

This is a testament to all that is good about fishing and anglers.

Research showed that Surrey has two streams holding some trout, and the better known is the Tillingbourne at Albury where Peter Cockwill, who has one of the best fishing shops in the UK, gives great advice. But, there is also, another option.

The Peper Harow Fly Fishing Club has water near Elsted. Its club house is in the farm yard of a building which recently had been used for a location set for the latest ‘Robin Hood’ movie, starring, Russell Crowe, firmly putting the tiny village of Elsted on the map.

I had exchanged correspondence with the Hon Sec., Charles Stuart, and met him at 9 am on a Sunday morning when he apologised for there being so much activity on his beat. He turned out to a retired financier, and is putting all his energies into the club. He was there that day, as part of a fly life and insect investigation (The Millenium Fly Survey); as was an inspector from DEFRA, who was removing the highly invasive American Signal Crayfish, from some twenty traps anchored to the riverbed. He ‘removed’ dozens….“They’re good eating….do you want some?” he asked me ! American crayfish are voracious eaters of absolutely anything, and are also cannibalistic…I declined !

The river is on greensand, and resembles the Wiltshire’ Nadder, another one.

It’s good trouty water in parts….swaying bankside grasses for cover, with a few exciting pebble based runs and good weed growth. A sunny day at first, but clouds soon to come, and as soon as I saw a rise I covered it and hooked my first Surrey trout just as Charles and crew approached to witness the feat ! He was so excited for me that later, and back at the hut, he refused a payment for my morning, the rest of which was spent exploring the beat below the old farm bridge, and just looking for fish, but there were few ! And my one, was it, although I did hook and lose a second shortly after my first when the weather was a little brighter.

I subsequently wrote to Charles and enclosed a small cheque asking that it be added to club funds to cover the cost of replacing some of the worn out crayfish traps (plastic ‘wears out’ when immersed in water for a long time, I discovered) He graciously replied with the offer to join him on the Findhorn, if ever that far North !

[Note…This year (2010) I noted that the PHFFC has put up a day rod ‘prize’ in the Wild Trout Trust annual auction….I wonder if this was conceived as a result of my visit ?!]