Clive Gliddon, an official of the Billericay & District AC wrote to tell me that their section of the R Pant at Shalford had some trout in it which their, predominantly, coarse fishers would catch from time to time, when indulging in their paste and maggot, worm or bready, means to capture the specimens they seek from this exciting little fishery.

I tried, using the flyfishers’ tec hniques but could not match my Coarse Brethren, and in spite of several visits. I caught dace on the fly, and chub, too, but no ‘spotties’, or even rogue, escapee ‘bows.

OK…an admission…in a fit of intemperance (or maybe inventiveness!), I also made a visit last Winter, armed with a small spinning rod and a few Mepps to try to eke one out of the Mill Pool at Codham, but this produced only a solitary jack pike of 20″, who was quite surprised to meet me!

One final attempt this month produced another dace, and some fun, stalking chub, but I was not disappointed, because a ‘cunning plan’ had already been hatched with Rob Mungavon, and this was put to work, the very next day.

The Cam or Granta  rises near the delightful Essex village of Newport. It flows in a tree lined corridor through gently rolling farmland and its banks are untended and natural with all that entails, until it reaches Audley End, where in sight of the glorious Jacobean House, it is impounded, and then released to flow through more open territory toward Cambridge. It is a short stream, filled with cool water from its aquifer, which is supplemented by spring waters whose numerous entries are evident by those little bank side distortions in their muddy slopes.

The water was low, very low. 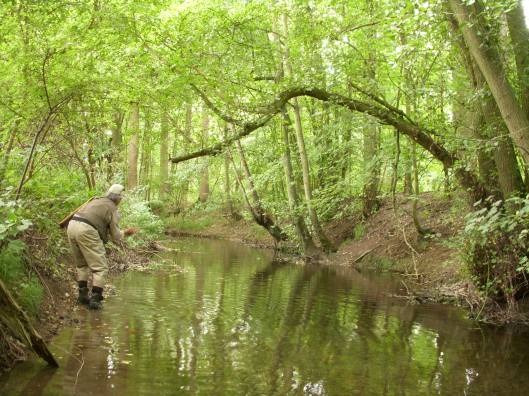 Stealth was imperative and the littler fish in the real shallows could be seen skittling away, in water illuminated by the sunshine, and the bigger, too, and  from yards behind, spooked, maybe, via vibrations from my heavy wading boots on the hard banks?

We walked out of the water on the sloping banks where possible (nb. stinging nettles, still do, in September!) and so as to avoid sending warning signals through rippling the flat pools. The alder roots 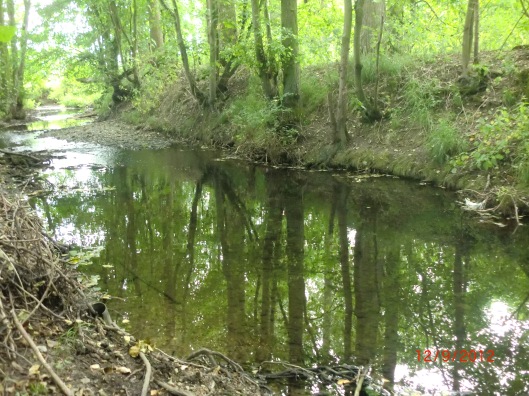 whilst seemingly offering footholds, were in reality floating, and a missed step meant an unexpected drop into deeper water where fish were hiding from potential predators (you don’t live too long if a small  wild brown in a narrow, shallow stream, without some serious self preservation skills!)…so that pool was not worth casting into! And casting in this tightest of environments was an incredible test, and more so when the wind picked up. Moral(s) of this story…enjoy where you are; flies are cheap; leaders, more so; patience is truly, a virtue!! Also, I need to revisit my theory about rod length. Rob used a little five foot bamboo wand with real skill.

And he really knows his fishing, and his wild trout, and suggested that even the imperfect cast should be left to drift naturally, even if really slowly in the tedious flow of low water. For in September these fish know that the larder is emptying and it’s better to eat now, because Spring and new shrimp and juicy pupa are several months away! So they can be tempted, 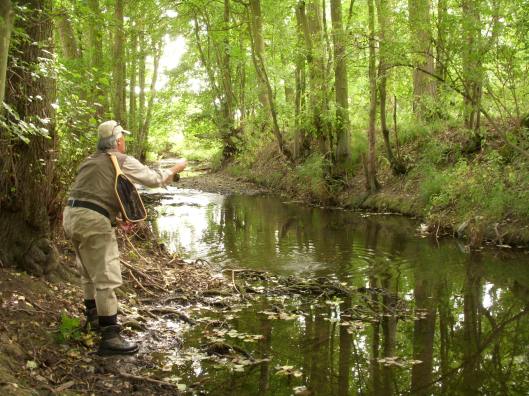 and without too specific an offering, and mine, an olive CdC, proved tempting to two fish….one tiny, 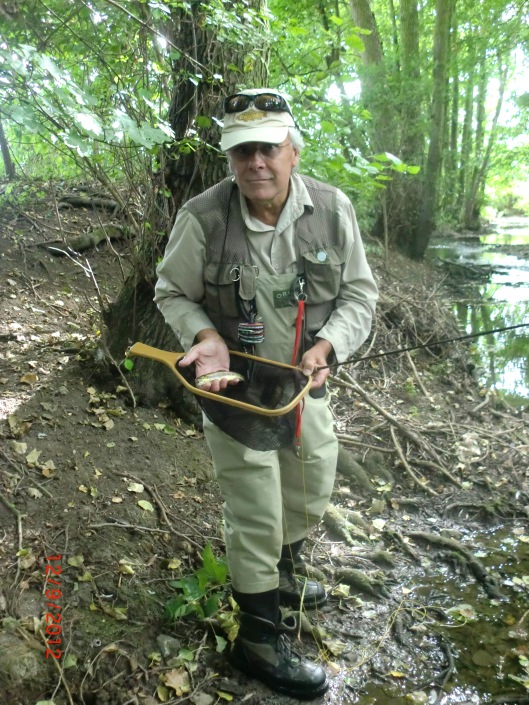 the other a beautiful monster of at least nine inches…all nine inches of beautiful wild Essex trout!  Heaven !!

Essex must be one of our flattest counties, so the chances of finding fast flowing, clear water holding trout must be slim.

My searches have been considerable, though, and various websites suggest that there may be trout in the Chelmer, and possibly in the Blackwater, and certainly in the upper reaches of the Cam near Saffron Waldon, where the Audley End Flyfishers have some water, but as you know the Cam has already featured in my ’journey’ and I would like to find a stream which is entirely in the County, if possible.

And then I discovered that the Billericay & District AC, a notable coarse fishing club, has beats on the Roding, the Stour, the Wid, and interestingly, the River Pant.  This stream rises on the edge of Debden Airfield in North West Essex, and flows toward Braintree, where its name changes to the River Blackwater. Andy Thomas of the WTT had already suggested that the headwaters of the Blackwater may have some trout, and so I guessed that the Pant is where he was suggesting.

The BDAC website claims that the Pant near Shalford does hold trout, so I thought I should join, and try to find out! 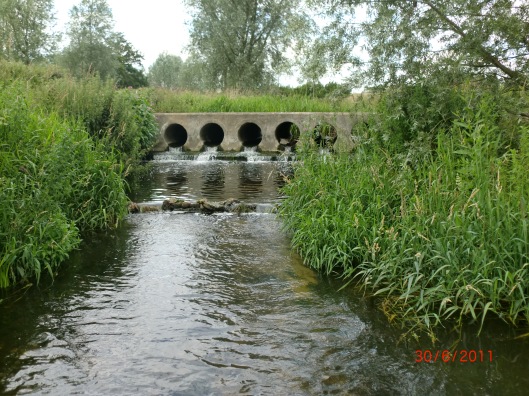 Well it’s a pretty stream and my first visit was in mid-Summer, for being predominantly a coarse fishing river, the riparian owners acknowledge the season as being from June to March, and by that time, the over growth was considerable on steep banks, and access to the water was limited, but fish were moving, although these turned out to be chub and dace.

My first and second visits were fruitless, so I wrote to Fishery Officer, Clive Gliddon, whose response has convinced me that persistence is necessary, and so I shall…persist!

Dear Tony.
With regards to your txt re Trout in the River Pant.
I personally have caught trout from the start of our stretch at Shalford Bridge downstream to our boundrary at Codham Mill.  All my catches were caught fishing for Chub, using maggots.
The trout are still there, as we have one angler who regularly fishes the river and catches.
I have seem Trout in the river as far upstream as Great Bardfield (my own village) Sizewise, my catches were small around 8 ozs etc , but I have heard of 1 Rainbow taken of just over 3lbs.
It appears the Trout got into the river from an old hatchery at Codham Mill 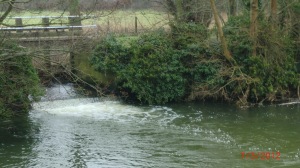 which closed many years back.
I hope this answers your question.
Kind regards
Clive Gliddon