Why are anglers so daft?

Last night the weather forecast said that rains would move from the South West and arrive and soak the South East by mid afternoon!

On the A3 at 7am, the ‘Today’ programme said the same, as I headed to Portsmouth.

Coming out of the Hindhead tunnel and with the South Downs in sight, or at least almost, as the cloud base was so low, I knew rain was already falling, and I wondered whether to turn around and head back to London, but I reasoned, I would catch up with the commuter traffic and this would make that option rather tedious, and besides, I was only twenty miles from a Wight Link ferry, and having made the effort why not continue?  Even if by now it was tipping down!

But clearing the Downs and with Langstone Harbour, now in view it was dry….so that was a good decision!

£52 later and I was on board the 8am ferry to Ryde, and it started raining, and rather seriously…yet again the forecasters were wrong, as the rains arrived early.

It was to the Medina at Newport I drove, to check out what the EA’s Dom Longley had suggested as an opportunity. Walking wader jacketted, my top half was protected from the rains, but not my light weight walking trousers, but they dry quickly, and whilst noting this tiny stream might deliver what I sought, I was already too wet to bother fishing, so set off in a south westerly direction, and toward Shalfleet, in hope that Dom’s primary thought might deliver!

The Caul Bourne is a tiny ‘river’ but considered to be one of the Isle’s main waterways, and it flows for just 8 kms from Calbourne to its estuary at Newtown. It meanders, wood bordered, through farmland, and I sought out fishable bits, driving along single track roads close to Newbridge, until a road sign highlighted a weak bridge, and I encountered such bridge close to a mill, and stopped to peer into a shallow, pebble bottomed stream. Hhmm! Meandering streams create little outer bend pools, which  might just…!

Rather wet yet again, I sloshed along a stony drive to enquire of the homeowner whether there were trout in his stream, and my arrival having been heralded by a duo of lovely Labradors,  I was duly met by James, who whilst both amused and curious, generously allowed me on to his parents’ land to have a go, and bid me ‘good luck’!

The Caul Bourne is three feet wide, and whilst downstream nymphing in tight surroundings is poor technique, I sensed few other options, but there was just a tinge of colour n the water to afford me some camouflage.My first catapulted cast (courtesy of Alex Cortet’ tuition) snagged,

but …keep going! This was warfare…sneaking double-upped and under dripping weighted branches, flicking here, flicking there….

I thought I saw the splash of a moving fish, but it might have been a bigger rain drop. Either way, it motivated!

And then, a deeper pool, perhaps three feet or so…but no takes.

And then another bend,  and another pool, but still nothing.

And then another, and what was that?

…a pull, another pull, it’s a fish, but what is it? James had said that any fish were scarce in his beat, so when this one was close to the surface and I saw a spotted yellow flank, I was ecstatic. The outer edge of the pool was lined by filamentous roots, and I knew that taking him would require luck, and so carefully, and slowly I edged him closer, and after a few lunges, brought an twelve inch fish to hand. And I was lucky.  I had a bead headed #18 PTN on the point, and he had taken the #18 yellow caddis pupa on the dropper, so how the weighted nymph had not snared, I know not. 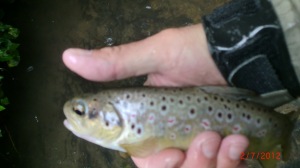 Perhaps this was my reward for the daftness with which I had set out at 630am this morning  !  I did not need another fish, and after only thirty minutes, or so, I returned to Tonka, extremely happy. I was wet through and did not notice, but stopped by to thank, young James, and share this picture.

I thought that the Isle of Wight was always going to be difficult, but thanks to guidance from Dom Longley, my lovely fish means that I am 41 down, and now have, just five counties to go.

Yes of course it’s a county, and a websearch of the trouting opportunity took me to the Isle of Wight Freshwater Angling Association – www.isleofwight-fishing.com ,and an email to them explaining my mission elicited the following very helpful reply-

Derek Holmes, I now know, is Chairman of the club. How very kind…and tempting !

Derek’s encouragement is supported by the Environment Agency webpage http://www.iwight.com/living_here/environment/estuaries/images/isle_of_wightrivers.pdf

which states – “The Eastern Yar and River Medina both have populations of small wild brown trout, characteristic of chalk stream headwaters.”

The Club’s website suggests that Wightlink is their preferred ferry, and the crossing from Portsmouth to Fishbourne leaves every half hour and takes just 40 minutes. Scotties in Sandown is 10 miles from Sandown, so, I reckon the run down from London, with a pit stop and waiting time, then the journey to the riverbank should take under three hours, so let’s get online, and book it.!

Well, it actually took a lot less because I drove from Amesbury, where the night before I has fished the Avon until dark and enjoyed a cracking evening at Durnsford taking two browns and three grayling from D1 on an olive Klinkhammer through the evening rise. 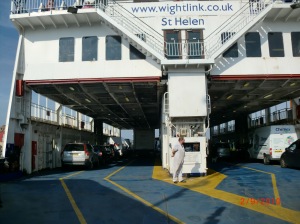 “Give yourself an hour and a quarter from Salisbury way” the Wightlink telesales woman said, and well within an hour of leaving my overnight hotel, I was planning on an early arrival and some breakfast at the terminal…until I hit the wall of traffic descending into the city on the M275.

To say I was concerned about missing the ferry was an understatement, but misplaced because the saver fare was easily transferable, and I was in no hurry nor pressure to return home, and in a way, wondered whether waiting until dusk was the better plan, because the day was bright and sunny, and not conducive to catching my prize.

Scotties in Sandown is a gem of a shop –

But, “we don’t do day tickets on that stretch of the river”, although a phone call, supported by the Chairman’s email produced one for the modest sum of £8, as it did a route map – 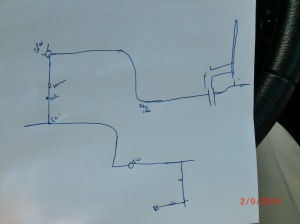 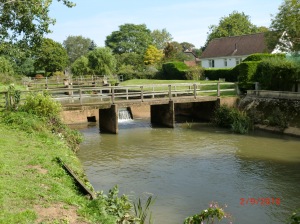 On arrival at the mill, whilst noting the muddy water, I was expectant and feeling lucky, flushed with last evening’s success, and some early casts of a gold headed PTN produced two dace.

But a wander upstream revealed a tight little stream where fallen trees remained where they fell,

and bankside vegetation grew unimpeded to narrow even more, a stream where there may be trout ‘lurking’, but none showed that morning in the murky water.

So I went in search of the Medina, which, just above the tidal reach in Newport looks trouty.

I flicked a nymph into the run below a sloping weir to no effect….I was probably poaching anyway!

I cannot give up on the Isle, and will do some more research on the Medina.

It’s a pretty island and with no roads of scale, everything is easy paced and somewhat pedestrian, and it is probably a pleasant place to live. Now…..and not to be beaten (!), when fishing with Peter Lipscomb on the Itchen, he mentioned that he has a house on the Isle and will speak to friends there to see if….