A request for advice on Fly Fishing Forum, elicited the following warning from ‘Marazion Midge’, a serial forum Poster  –

“You’re quite welcome to come to Cornwall but please don’t count us as an English county. Good luck on your quest”

A double edged sword, if ever there was!

Now, for personal reasons, Cornwall (Kernow) is not my favourite county, but the fact is, that it is on the map of the UK, and is filled with trout, and I wondered whether it might just offer an end of season ‘bonus’ county, so I plotted. This was guerrilla, snatch tactics….in…out…and with the prize I sought but without being seen!

Wkipedia reveals there are thirty rivers in Cornwall, with most offering salmonids. Wishing only to make the smallest of incursions into this large county, it was obvious that this was possible with just the tiniest diversion off the A30, and only a few miles from the Devon border. I knew that the Arundell Arms  offered water on the Ottery, and arranged an overnight stay to use this loveliest of fishing hotels for my base. [see ‘Musings 10.1]

Searches showed that the Launceston Angling Association has water for which, Secretary, Colin Hookway, informed me, day tickets could be obtained from the Post Office in the tiny village of Lewannick. “And in any case, the parking in Lewannick is easier” he maintained. So I had options which excited, as I set off on the 225 mile trek, quite early, in Tonka Too.

A pit stop or two, but still a leisurely ride on a sunny late September, and my spirits were high, and the parking in Lewannick was only complicated by the narrow main street where everyone smiles! And a day ticket costs less than the Congestion Charge from TfL… to fish

Armed with a helpful map I was off to find the river. Now perhaps I went the wrong way, but I spent the next ten minutes hoping to God, that I would not encounter any vehicle coming the other way along the narrowest of lanes/tracks, whose bank side foliage neatly brushed off most of the recent mud which had accumulated along the flanks of Tonka. This lane was created for small horse drawn carts and farm beasts of the distant past and long before the petrol motor was invented, and is now a dog walkers’ paradise. But all this just increased the sense of adventure which accompanies such endeavours as my ‘quest’ and I found myself smiling, just like the locals!

I found the old grey stone bridge at Trekelland which separates the Associations beats 10 and 11, 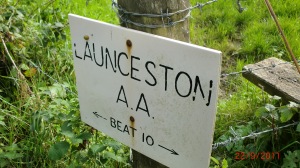 and pulled over onto the verge, wondering why drivers had driven so fast across an ancient bridge to collide with it and cause so much damage, carefully restored by the good folk of Cornwall’s highways department.  Shame…what is the hurry, and in Cornwall of all places?

There are several miles of water on these beats, so which, and my choice was to set off downstream on the lower beat and fish back to the car, and then, maybe onwards and upwards. The meadows are lush and the cattle are lucky, and the pats were covered by those orange dung flies, which seem not to feature on trout’ diet? Any peering into the shallows and runs on my stroll had to be over the miles of barbed wire which kept the cattle away from the four foot drop into the drinking water they probably lusted for.  And of course the same barbed wire required some pretty gymnastic approach work from your author to get wading…but this was no problem!?

The water had a tint to it, after rains of a day or so past, but this is a good thing for anglers, and the wind, light as it was, was upstream, so if the dry was to be tied…! The trees lining the river all the way down,  provided a canopy which offered the careful cast, opportunity, but the careless one, a tangle.

I passed one stretch of some one hundred yards of tempting water, which registered,

and kept walking. Hang on! Looking back over my shoulder I saw what looked like a rise, and kept walking. Are you mad, I thought? Those are Cornish trout and I had just driven a long way to catch one, so, retracing, I was into the glide. And there were a couple of casts of the careless variety, before Mr Adams rose a fish which was too quick for me, as were the second and third, just like their tiny Devonian neighbours in the Dart system, but before too long…and the first was a silvery fellow with black spots, 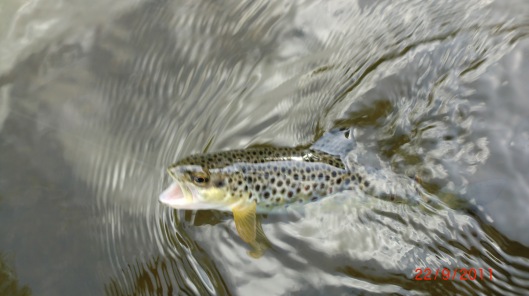 followed by two more, in more traditional livery of buttery yellow flanks, and red and darker spots. The elk hair caddis featured, too, when sedges started skitting across the surface of water no more than two feet deep along that productive run.

One taken on the caddis filled me with gratitude, for what our past time can offer in very special moments. On the water there was just the slightest movement and a modest and the gentlest of sips, as he sucked in my #18. This was no ‘take’ of May violence, and with my, lifting equally gently, there he was, hooked…a magical moment in the tranquillity of the Cornish sunshine, and the fish was returned to grow on. So calm, so perfect, so complete, so ‘fishing’…I think it was instinct which prompted me to lift my rod. A rare moment of fishing ‘perfection’.

Perhaps, I should rethink my perspective on Kernow! 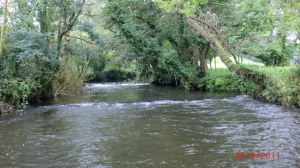 observing what I imagined are sea trout lies, and just stopped and cast into trouty lies. Returning, I has a few casts into where I had began, but with no luck this time, but did not care! At several more likely places I clambered into the waters and was rewarded, and on returning to Trekelland Bridge,

realised that some seven fish had come to my net, more than justifying my 225 mile ‘indulgence’. I was happy. And so to the Arundell  Arms.

The hotel is for anglers. The public rooms are filled with memorabilia. The corridors, too, along with a notice board informing which beats are for which visitors, and their catches, thereafter. The real attraction (apart from a spectacular menu of fresh, seasonal and local foods) is the sparsely merchandised, but historically impressive, ‘Cock Pit’, where I bumped into, Instructor, Tim Smith. I had telephoned him some weeks before, to enquire about availability of the Ottery beats, and he remembered speaking to the man ‘collecting counties’. There followed a truly enlightening conversation about the end of season fishing on his waters, the rise and the flies still hatching, and the influences on the Tamar catchment. And….on relating my afternoon fun to him, he quickly realised that my silvered spottie was a juvenile sea trout. Fantastic…!

Now, in truth, fishing the Inny was a bit of a punt, for I thought that the hotel’s beat at Hellescott Bridge might produce what I sought.

And the next day, it did, eventually  (one brown and two grayling)…but my enduring memory of the Inny, will remain, just that…Funny how the unexpected can be so rewarding, and the expected, sometimes, disappointing. But that’s life.

What a wonderful season I have had.