Ah! The frustrations of fishing, and in particular in the may fly season, which I have always considered to be misnamed, Duffers’ Fortnight. 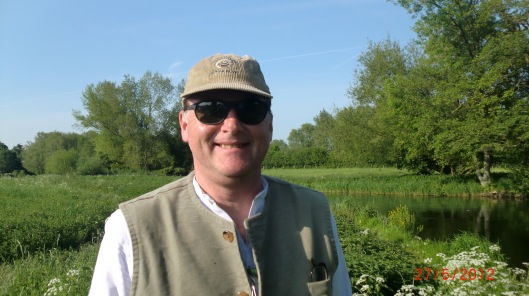 has a rod on the Broadlands beat of the Test, and he invited me down.

After the wet and windy start to the season and to Spring, in general, the heat we enjoyed in March has returned with a vengeance, recent days have been glorious…hot, clear and long. The mays have been coming off the lower Test for a

week, and already the trout are gauged and getting lazy, I was warned by Head Keeper, Jon Hall, who also advised “a six weight, nine foot rod if you have one” because with wading disallowed, and the river wide, the expected warm weather breezes would test the casting skills of most, so “heavy”.

Before lunch we neither touched a fish. So, given the suggestion that “fishing should begin at about 4”, we plumbed for a bottle of ale, and a long salad-y and meat-y, boys-y lunch, washed down by some very pleasant Cotes du Rhone (2002!), and put the business world to rights. Then, back to work.

At 6pm, keeper Neil appeared, and suggested which flies to tie, “when it starts”…he absolutely promised.

“What you’ve got no mayflies?” he complained, but gave us both one, as well as a huge spent version, which was very kind, for his generosity to his anglers had not replenished his may box. And we fished the middle of the Moorcourt beat,and watched, excitedly, as fish began to move, and casting with Neil’s may, this proved to be ‘the fly’ as we both got fish to come up to it…and spit it out! At least mine did…because Chris caught a good brown, then generously hoped his guest might, too.

At 630pm, I caught another fish – an even bigger one, and also, the wrong species!

At 7pm and just after Chris commended the way my line unfurled, and the delicate way in which my may was presented, faultlessly, I hooked a trout, and was promptly, snapped!

The same thing happened, several times, and again at 730pm when trialing the spent may, after a few satiated (one shag and you die…who’d be an upwing?!) males began coming down.

Oh, what a day!! Too many flies lost to bushes on the back cast, but this meant another visit to Grangers this morning, just in case the Co Durham mays are as big as the Hampshire ones!!

But it was a great day. The fishing hut is a treat…

the river at Broadlands is magnificent…

the weather was glorious..Chris was a great host, and there were simply dozens of browns there, and if we had fished the day before, or a day later, perhaps…but who knows!? That’s fishing, and I loved my two chub…honestly!