Why did I think that Cheshire was going to be easy?

I remember attending a conference in Macclesfield years ago, and thinking then that my road trip passed through what looked like, trouty terrain, and the Pennines are close so, too…but trout streams are few in reality.

Several angling clubs claim that in their waters trout can be found alongside fit barbel, and impressively chump chub, and my early enquiries elicited a response from Nigel Rogers, a real gem of a fellow

and then Chairman at Bay Malton AC, who confirmed that his Committee supported and endorsed his own enthusiasm for my task and a date was set for us to meet, for his club was one where what I sought might be found.

As it happened, we arranged to meet on the day following my success on the Goyt when I ‘netted’ Greater Manchester, so my confidence was high!

Our meeting place close by the Bolin, near Manchester Airport, probably was not in Cheshire, so it was on to Congleton, most definitely in it, and to another BMAC beat.

A couple of hours on the Dane there delivered two salmonids,

but genus thymalus thymalus, which could not count! So where next?

I took another look at the Clubs’ listing I had identified which included Eaton Fly Fishers, Middlewich Anglers, Dunham Massey AC, and the renowned Prince Albert AC, and all responded with helpful advice, but it was the Lymm AC which seemed to offer the best chance of what I sought, and they were taking new members! I joined!!

Recce-ing waters is never easy/convenient from a home 200 miles away, and my first visit to my new Club’s waters followed the rains which punctuated the early weeks and months of season 2012, 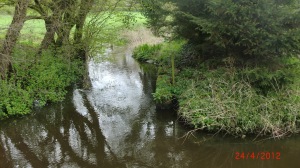 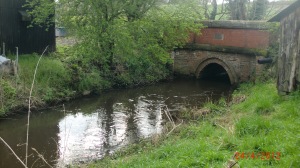 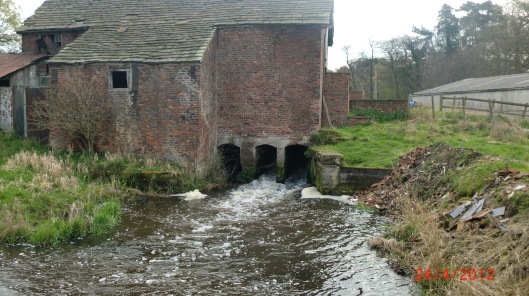 and not a cast was made on that visit, nor was another possible in that year.

This year (2013), the early season was cold, very cold and fishing was pointless when Nature still slept. Then, just a couple of weeks ago, the Jet Stream, finally moved North, of the British Isles, from its seemingly permanent residence over Central France. We have now what we have yearned for, for seven years…a Summer!

I observe that the trout streams of the south have more ranunculus than I remember. The Wylye is full of it, the Ebble is trickier because of it, and Paul (Jennings) tells me that in his stretch of the Chess it is strangling the fishing! The weed is keeping water levels high, aquifers being totally full, and even early weed cuts are having marginal effect. This is a challenging year.

In the Midlands (Cheshire, at least) streams, where weed is scarce, levels now are low. Today (July 15), I ventured to the Gowy near Chester, and the Dane in Congleton, but did not cast a line. In fairness, parking Tonka in Congleton at the prescribed place, travellers had taken up residence, which made my staying there less likely, for some reason. And so it was to –

This Lymm AC stretch at Bate Mill is close to the magnificent Jodrell Bank,

and its massive telescopes. I visited it last year, and saw a fish rise in a side stream, but there is also a mill pool there and I convinced myself that this not only held trout but there was one with my name on it. Whilst the spate made fishing then, a little pointless, I made a few casts with weighted nymphs in idle hope. But this still felt like the place where success was most likely, a thought endorsed by chum, fellow Brewer, and salmon mad, Chris Lees-Jones of J W Lees, and also because of the optimistic description of water by Lymm AC – “(the river) is located in an area of such beauty it needs to be seen to be believed. The river abounds with trout, both resident browns and escapee rainbows….”

The Peover Eye is a lovely and fascinating name. It seems to be the combination of the word Peover, which comes from the Welsh word for ‘dart(ing)’ or ‘sparkling’; and the Anglo Saxon, Eye, meaning small stream. It rises near Siddington and flows for some four miles and joins the Smokers Brook above Lostock Gralam, to form the Wincham Brook.

This day, I arrived post Gowy and Dane at one-ish. The sun was high. It was unbelievably hot, but I could not resist a couple of casts. Then off to my hotel to rest up after too many hours driving, from London.

Returning to the river at seven in the early evening, I spoke to Sue en route, and suggested that my mission might be coming to an end. Merseyside seems impossible, Bedford, much the same, and Cheshire…well just how many more times should I bother tripping up the M6?

I had a look, but did nothing. The waders stayed bagged. The boots delightfully dry. I had already checked out some fishing in a real trout county (Derbyshire) for tomorrow, in scant consolation for the disaster which is Cheshire.

Oh well! Then I saw what looked like an angler upstream of the disintegrating mill, and walked up to chat to him. “I am looking for trout”, I opened. “This is club water” he responded. “I am a member” I replied. We were connected!!

The water above the old mill is stuffed with trout, and a members’ return chit of just a few days prior, revealed five rainbows in a couple of hours in June. My new friend showed me a picture of a handsome rainbow taken by his friend shortly after their arrival just before mine. And he himself, had had a memorable visit with a net full of trout from this slow moving stretch earlier this year. So there are trout here! That he is a coarse fishing specialist made my interest in catching on the fly more intriguing to him. That his pal had a 2-lber minutes before I arrived, was intriguing to me. The high water and early Spring flows may have flushed some fish below the mill, he suggested. My head said that if these were rainbows, then a 7x tipped was a risk, as was a short rod less likely to cope with a warrior rainbow. But I was enthused, and got kitted up, accordingly. 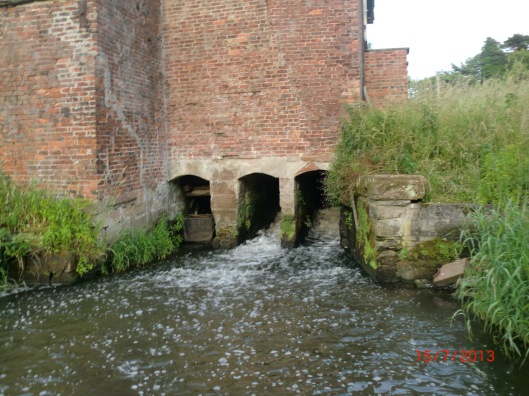 Down in the water, my first offering was a brown elk hair caddis #14, below which, NZ style was a #20 bead head nymph. The first cast produced a swirl, but to which I had no idea, but Boy, was I motivated? And then two more splashy swirls to what was hatching, and I was in determined mode.

Off came the nymph. Away the feeble tippet. Spotting a solitary May, with a white body and black thorax, in flight, it was on with a bushy caddis….the second cast with this offering delivered me my Cheshire trout, a 2-lb wild brown. 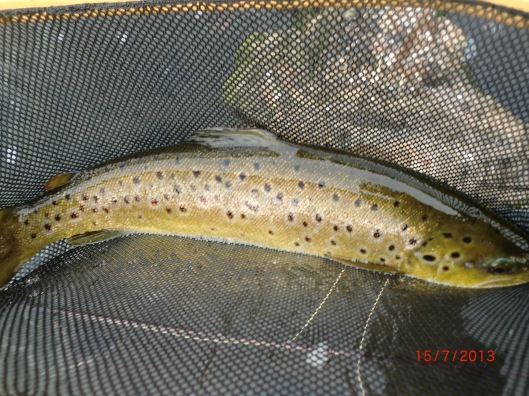 A few casts later, a fish, another brown, took a good hard look, and then yet another was mine!

Paul and Jack, and Phil

I am indebted to Paul, who was fishing and tutoring son, Jack, and to Paul’s pal, Phil, who pulls trout from the Peover Eye, with ease.

My kit worked worked for me when it mattered. Their’s did, too, and in spades!

Cheers, Guys…have a great season, and let me know if your methods out fish mine below the mill. I suspect they will!