Back in the nineties, I kept a hand written diary of some of my exploits, in a leather bound book, specially made for me by a Cambridge printer, who cut out alternative pages, so that the book could contain photographs within its total width. The printer is J S Wilson & Son (Bookbinders) Ltd, and the idea came from an article in Trout & Salmon.

Now to which Grandchild do I bequeath this work to? Any minute now, I will have my sixth!!

I decided to copy into this page, what I wrote in September 1997, but sadly my photographs then, were not digitalised, so you will have imagine what a pretty place I fished on Exmoor, and the little beauties I eked out of  –

“The Tarr Steps Hotel nestles in a deep valley in the middle of Exmoor, and was to be the location for a weekender with friends from Connecticut, which would guarantee it to be a very ‘liquid’ weekend, as indeed it was!

The Friday evening journey out of London (M’s 4 and 5) seemed endless, but the eventual welcome by the hotel team, and after  negotiating the steepest, narrowest, access lane in the dark and moonless light, clearly designed to keep out non-fishers, was genuine.  Dinner and  sleep, and then up to fish before breakfast, produced  two small wild browns on an Adams, and in the short fast run, just above the Steps. (This would not have been possible after the arrival of the car loads of Grockles, later in the morning) 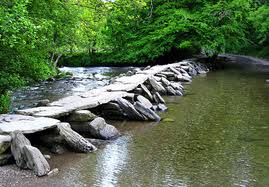 Leaving the hotel after a late breakfast, for some sightseeing and shopping, mid morning, it was an amazing surprise to see, on our return, that the top of a tree stump by the driveway, when we left for Barnstable, had been transformed by the talent of a local chainsaw artist, into a carving of a beautiful pheasant…

The fishing in the late afternoon was super. I took seven fish on Adams and various sedge patterns, by wandering up from the bottom of the hotel beat, and casting mainly, into quicker water. But, in doing so, I not only lost my favourite polaroids, but also slid into waist deep water, reminding me of the need for caution and respect when wading!

Sunday morning was spent wandering upstream from the Steps to Altar Rock. Only two fish, again on the Adams (para version….it’s the only way my fading eyes can see them!). But I did see a salmon resting in Hinds Pit.

The walkers, and there were plenty of them, did not distract, and the second fish was a fighting 8”-er. Eleven, in all  this visit”

Sadly, the hotel  is no more. It was bought and converted into a lovely family home. But the Barle is still there….