Is Rutland a county?

That’s democracy for you and an “up yours” to Westminster (see Musings 10.5)

But it is a VERY small county….and with a trout stream?

In 2010, that I spotted that, one Andrew Flitcroft offered a day on his beat on his Rutland stream to the successful bidder for a lot in the WTT Annual Auction, that I realised there was such an opportunity, and probably the only one. My own bids came to nought that year, for I had then not heard of ‘sniping’!

But I wrote to Andrew, anyway, at his office in Peterborough and he kindly agreed to host my visit the following year, this one, and I had offered to send the WTT what I had bid, as a thank you, if he would be so kind to accommodate me.

The ‘OK Diner’ on the A1 just upstream (north) of Stamford was our meeting place.

And so we met. Don’t you find that on meeting, you know instantly that you will like someone, and that you will enjoy their company…and so it was at 10 am that day, and so it proved to be the case. I suppose I am motivated by enthusiasm and energy and commitment, and Andrew has these qualities in spades.

He has a long lease on a piece of water, in one place adjacent to, but in the main downstream of the Gwash Fishing Club’s water, and it is fed by pipes at the base of the dam at Rutland Water ensuring a steady flow of cold water which remains so, constantly through the year, delivering a consistency to his stream.

When Andrew first walked the mile or so of water he now has, what he saw  must have excited him as much as it daunted him. He was greeted by fallen timber, heavy overgrowth, little light, sparse vegetation, slow moving water, deep silted margins, un-protected banks where grazing sheep or cattle could add to the woes of this water…but he saw wild brown trout, too. And it could not have been fished for years, and he saw an opportunity to create something special. Over the winter months of the past few years, he and a small number of friends have begun the recreation of this place. 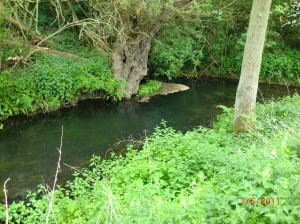 The stream has distinct sections. The banks on the upper reaches are clearer, running as they do through meadow and space owned by a school for special needs children, but the fish are easily spooked. The lower beat is unworked and still unfishable, massive overgrowth, still to be cleared….but the middle section…!?

This is a meandering ‘wonderland’ of difference, because you never know what to expect around the next bend in this pretty stream.

It could be a long pool, a short run, a flourish through a groin, or a deflector, and surrounded by wild flowers, and enough cover for fish to be confident, and enough bank side foliage for the angler to have to concentrate.

The fish are wary though, and Andrew, reminding me of the need for stealth, often had me be casting from a way back, and the roll cast was often required, too, in the tighter lies. Weed growth is coming on, but to Andrew’s disappointment, lowish water has left some weed covered by algae, and the brightness of weed growth will not be revealed until rainfall flushes the algae away.

The fish are quick and several were missed by ‘yours truly’ but an optimist, by nature, Andrew assured me there many more to come, and so there were, and a couple came to net early on my new favourite fly, #22 Adams, along with a few more misses!

The work that Andrew’s small syndicate has undertaken uses the materials which have revealed the stream as it is today, so that except for the odd piece of angle iron anchoring a flow deflector,

what you see comes from the river side and looks completely natural rather than man made. Plenty of scouring runs have been created, but the silt remains in the margins and will, until washed, or blown away.

Then, his stream will look resplendent. However, what is there today is a minor miracle and has been achieved in only five years of dedication. It is a treasure……and is Rutland’s only trout stream.